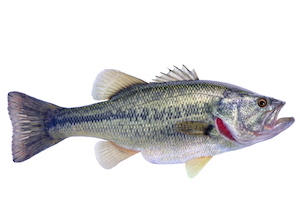 The Largemouth bass, as the name implies, has a large mouth and a high ratio of fin surface to body size.

How to recognise a Largemouth Bass

Those populations that are in clear, weedy water are darker and the black pigment is more obvious than those in darker, turbid water which are a pale green color overall.

While they can live as long as 15 years, the average life span is around 10 years.

What’s the difference between Largemouth and Florida Largemouth bass?

Very little difference in appearance between the two. However, the Florida largemouth tends to grow faster and larger.

The Largemouth is a member of the sunfish family and differs only in size from the southern subspecies, the Florida largemouth bass.

The northern largemouth has approximately 59 to 68 scales in the lateral line.

The southern largemouth has approximately 69 to 73 scales.

These bass average about 13 inches in length and their size varies greatly.

Those that are caught in northern latitudes are rarely caught exceeding 5 lbs and considered a big bass. In southern latitudes largemouth can reach as much as 10 pounds. However, the average size caught is around 1.5 lbs.

In general, you could consider a 5lb largemouth to be a trophy fish in the north, whereas a 10lb largemouth in the south wouldn’t be uncommon.