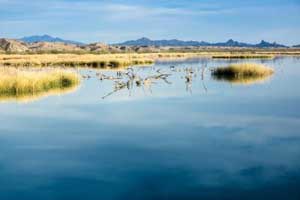 When river temperatures reach 55°F/13°C in the Spring, Striper bass begin to swim upstream from the ocean. However for those that are land locked spawning is successful in only a few places like Lake Texoma, which is a deep reservoir in Texas. Spawning doesn’t actually occur until the river temperature reaches about 60°F/16°C. Stripers don’t build nests. Instead several small males escort a larger female to an area where eggs and milt mix in a flurry of thrashing males. The floating fertilized eggs must be kept afloat by the river current for 30 to 70 hours.

The eggs are semi-buoyant. But if the water temperatures are outside of the spawning range, the eggs will sink and die.

A large female may release as many as 1.25 million eggs during her spawning run with each being roughly 1.2 mm in diameter.

After fertilization the eggs swell to about 4 mm. The eggs have a large oil globule that keeps them buoyant in flowing water but causes them sink in still water.

After hatching, the fry grow much faster than other North American freshwater bass. Colorado River and lakes formed by the Hoover and Davis dams

Only a small fraction of the 60 thousand to 5 million eggs produced by each mature female will survive.

Because of the specific water conditions required for successful spawning, most freshwater striper populations are the result of widespread stocking programs.

Natural striper bass populations are limited to the Santee-Cooper complex, the Colorado River below the Davis Dam (Lake Mohave), and portions of the Arkansas, Missouri, and Washita rivers and Lake Texoma in Texas.